If You Love IPA's?

If you love the IPA, you are not alone. The India Pale Ale (IPA) is a popular style of beer that originated in England in the late 18th century. It has since gone on to become one of the most popular and widely consumed beer styles in the world. The IPA has a distinct flavor profile that is characterized by a strong hop presence, a moderate malt character and a high bitterness. Let’s explore the history of the IPA and why it is so beloved.

The origins of the IPA can be traced back to the late 18th century when it was first brewed in England. The beer was originally brewed by the East India Trading Company as a way to satisfy the demand for beer in the colonies of India. The beer was brewed with higher alcohol content and a higher hop content than traditional English ales in order to survive the long journey to India. The higher alcohol and hop content allowed the beer to last longer and prevented spoilage. This style of beer quickly became popular in India and eventually in England as well. 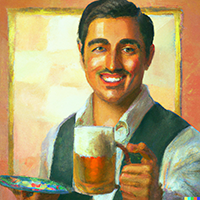 The IPA was created by George Hodgson, the owner of the Bow Brewery in London. Hodgson was the first to develop and market the beer to India and other colonies. The popularity of the beer in India inspired other brewers in England to replicate the style.

IPA's are strong, hoppy beers with a moderate malt character. They can range from 4.5 to 8.5% ABV. The hop content is usually quite high, ranging from 30-80 IBUs. The color of the beer can vary from gold to deep amber. The flavor profile is dominated by the hops, imparting floral, citrusy, piney and resinous notes. The malt character can range from sweet to biscuity and is usually balanced by the hop character. The most common hops used in the IPA are Cascade, Centennial, Citra, Amarillo, Simcoe, and Mosaic. The malt used in an IPA is usually pale malt, which is light in color and provides a subtle sweetness. Each of these hops has different flavor characteristics.

Cascade: The Cascade hop is a classic American hop with a unique floral and spicy aroma. It has a medium-high alpha acid content and a citrusy, grapefruit-like flavor.

Centennial: The Centennial hop is an American variety with a pungent citrus aroma and a high alpha acid content. It has a strong, clean bitterness, and a floral, citrusy flavor. 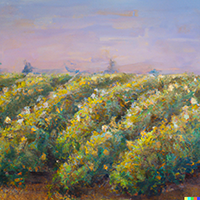 Citra: The Citra hop is a relatively new American hop variety with an intense aroma of tropical fruits and citrus. It has a medium-high alpha acid content and a strong, yet smooth bitterness.

Amarillo: The Amarillo hop is an American variety with a strong, pungent citrus aroma and a medium-high alpha acid content. It has a floral, orange-like flavor and a smooth bitterness.

Simcoe: The Simcoe hop is an American variety with a distinct piney and earthy aroma. It has a high alpha acid content and a balanced bitterness with hints of citrus and tropical fruit.

Mosaic: The Mosaic hop is a relatively new American variety with an intense aroma of tropical fruits, berries, and citrus. It has a medium-high alpha acid content and a balanced bitterness with a sweet and fruity flavor.

The yeast strain recommended for brewing an IPA is usually a highly-attenuating ale yeast. Popular strains include British Ale Yeast, American Ale Yeast, and Kveik Yeast. These yeasts are also known for their ability to attenuate, or ferment, the sugars in the wort to produce a dry, crisp beer. These yeasts are often used for high-gravity beers, as they have the ability to ferment even the highest gravity worts. High ABV is a key characteristic of the IPA.

If you love IPA’s, now you know a bit more about why you love them and how to make them. If you’ve never made one, you might want to try. There are numerous IPA kits available for you to get your feet wet. Good luck!