Home / Label Peelers Blog / Why You Want a Wort Chiller!

Why You Want a Wort Chiller!

As the craft beer industry has grown, so too has the need for advanced brewing equipment. One such piece of equipment is the wort chiller, which is used in the cooling process after your boil. This article will explain how wort chillers work, their benefits and impact on craft beer making.

What Is a Wort Chiller?

A wort chiller is a specialized piece of equipment that functions as a refrigeration system. It works by circulating a coolant through a tube coil in order to rapidly cool wort, the sugary liquid that is extracted from the mash during the beer making process. The coolant is water or a mixture of water and ice. You can either hook it up to a garden hose or if you want to chill it even faster, you could use a recirculating pump with ice water.

One of the biggest benefits of the wort chiller is how it cools the wort from inside the pot. When you just move your pot to an ice bath, you are fighting a harder battle. That cold has to penetrate the interior of the brew pot. It also has to fight against the temperature of the pot itself. Hot water has a lot of energy and indirect cold takes longer to achieve temperature transference. Since the wort chiller sits right inside the wort and it is constantly circulating, you will get to your desired temperatures much faster.

Ideally, you could battle the heat on two fronts. You can move your fermenter to an ice bath and use the wort chiller so you have two sources of cold cooling your wort at the same time. Ideally, you want to get your wort down to the desired temperature in under twenty minutes. 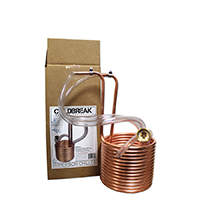 What Happens During the Cold Break

The faster your cold break, the better your beer and nothing works better than a wort chiller. The cold break is potentially the most critical step after your boil because it is so time sensitive. During the cold break process, proteins and other solids that were created during the boil are allowed to settle out. By rapidly cooling your wort, proteins and other solids clump together faster and in larger masses. That makes them heavier and causes them to precipitate out more quickly. The slower you cool, the smaller the clumps. Lighter material simply settles out more slowly, or not at all.

Lastly, it helps to reduce the risk of infection. Proteins and other solids can act as a food source for bacteria and other microorganisms. This can result in spoilage and off-flavors. By removing those solids, it drastically reduces the risk of infection. For all of these reasons, it is important for the cold break process to happen as quickly as possible.

Wort chillers are a very valuable piece of equipment for home brewers and craft breweries alike. By providing a faster and more efficient way to cool your wort, a wort chiller will revolutionize your beer making process. It is the best tool to prepare your wort for fermentation by minimizing potential problems caused by cooling your wort too slowly. Good luck!